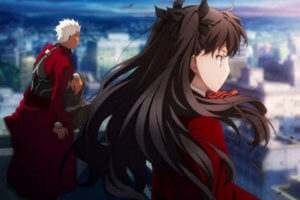 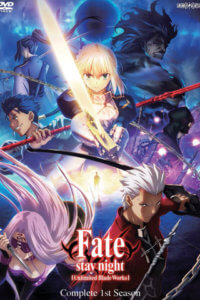 Every few decades, a war occurs on Earth. A war of masters and servants of mythical/mystical origins. The ultimate trophy of the war is called the ‘Holy Grail’, capable of granting the victor of war whatever they wish for. Shirou is forced to join the war, but he will only fight to protect the ones he loves, and not for the Holy Grail. How long can he keep everyone around him safe, when this war is one to death?

This review contains a couple of spoilers!

FSNUBW is a beautiful anime. It presents an easy-pacing story with glorious characters and incredible animation. One of the reasons why I completely adore this anime is the very decent nature of it. It does not overdo anything. In most anime, you’ll find elements like humor, fan service, gore being overdone, but not this one. It moderately blends beautiful themes like romance, history, action, and fantasy together in one anime to produce a heartwarming piece. It is by far the most mature shounen anime I’ve seen.

The story encircles teenagers, Emiya Shirou, who is dragged into a mystical battle royal called the fifth Holy Grail War. In this war, seven masters each evoke one warrior called servant (an incarnation of a mythical legend past) to fight for them. The battle is between the 7 pairs (one master and a servant) and is to the death. The victor of this battle is granted the Holy Grail, an omnipotent magical chalice that can fulfill any wish or desire of whoever claims it.

Shirou was raised by a retired Magus named Kititsugu Emiya (who would die years later), after he lost his parents, as a child, to a massive fire accident that occurred in Fuyuki city. This incident built in him a sense of responsibility for the lives of those around him. He has a deepsome principle about justice and peace, which makes it easy for him to make some decisions at the cost of his own well being. This dude legit has no concern whatsoever for his own life, as long as the other person is safe, he’s cool with whatever happens to him.

He attends a school with Rin Tohsaka, who happens to be a mage and proud master of a powerful servant called Archer. Primarily masters are mages, meaning they possess magical capabilities or traits, which is strong in some and pretty much dormant in others. A mage’s ability increases with years of training and practice. That’s why while some mages are capable of powerful incantations and releasing energy blasts, some cannot do as much as cast one spell. You have to be a mage to evoke a servant because magic is essentially what grants the master connection with a servant in the first place.

On an unfortunate evening, Shirou walks in on a battle between Archer and another servant called Lancer. Being the rule, human witnesses to the Holy Grail war have to be eliminated, so Lancer charges Shirou and attacks him violently. However, Rin manages to save his life. Lancer would attack again and this time finish Shirou for good, but for the timely interruption of Shirou’s own servant, Saber.

Turns out, Shirou somehow happens to be a mage too. And Rin had accidentally triggered some events which caused Saber to be summoned and linked to Shirou. Automatically, Shirou becomes a part of the great war, since now he has a servant and a most powerful one at that.

In the rise of more enemies, Rin and Shirou (as you’ve probably predicted) form a temporary alliance. Although Archer still shows contempt for Shirou, Saber will do everything it takes to protect her master. Archer’s motives remain unknown, and he remains dangerous. But with the introduction of even greater threats like Caster, and the golden badass ‘Gilgamesh’, there are more things to worry about.

The story introduces various masters and servants. You’d think it all about battles and then someone emerging as the victor and whatever, but you’d be wrong. There are so many twists and shocking turns of events. Thing is you can’t predict what happens in this anime. You just have to stick your eyes to the screen and make sure not to miss even a second of it cos every statement builds up to make the entire plot make sense.

In any case, I find the ending of the anime well befitting and dramatically satisfying. FSNUBW will have you drooling over the title first. And then you watch the anime and realize it also lives up to such an amazing title.

Like most other anime, my only problem with this one is the protagonist. I kind of respect his principles and love it when he goes all-powerful and determined against an enemy, but he can really suck sometimes. Sometimes it feels like his principles are always getting in the way and consequently causing harm to not only himself but to his servant, Saber. I’ll just be blunt, Shirou can legit annoy the hell out of you! But you grow to like him. Especially when he pulls off some really surprising performance against enemies. The last fight further proves he is a formidable mage and a character to be respected.

The character design is amazing! Especially the servants. The seven servants: Saber, Lancer, Archer, Caster, Berserker, Assassin and Rider are so amazingly designed. Each of them with a unique outlook to tell their tale. Saber, for example, being an incarnation of great Arthur, King of Knights, has this glorious armor that comes on during battles, it’s epic! She’s literally a knight in shining armor. And Archer’s red is just daring and sexy. The art is simply enticing, subtle yet
speaking a lot. The animation is great, striking visuals. The fight scenes are to live for!

Ultimately Fate Stay Night Unlimited Blade Works goes way beyond some war of clashing swords and tongues, it goes past the trophy of Holy Grail. It is all of that absorbed in an intriguing drama where each character is well understood and accounted for. Every tale told of the war legends (incarnating as servants) adds more beauty to the anime. Honestly, watching it feels like I’m reading a perfect fantasy novel, it’s an amazing feeling mate!

Well, the sounds are cool, well suited for the scenes. The opening and closing theme though, while being nice and all, are quite forgettable.

FSNUBW happens to be just one series in the Fate franchise. There’s Fate Zero, Fate Stay Night, then there’s Fate Stay Night Unlimited Blade Works, there’s also Fate Apocrypha which I recently started watching. I heard there are more in the franchise. I’m going to make it a point to watch every series in the franchise. Fate Stay Night and Unlimited Blade Works were amazing, although they both share a very similar plot. Apocrypha though has the same concept of Holy Grail and stuff but has a significantly different story. I am presently enjoying it so much, I can’t wait to do a review.