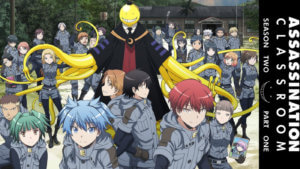 So at one point in time, you probably might have thought of stabbing your teacher (’cause you basically believed he deserved it or just didn’t like his face) but you didn’t, mainly because it’s illegal I’ll bet. Well for the students of E-class, kunugigaoka Academy. They were legalized to skewer their teacher with a knife, shoot him even, as the situation required. There was even a reward thrown into the fray. Kill your teacher and get paid? What a life right? Everyone in the class clamoring to insert a pointy thing into the teacher’s gut, well how difficult could that be. I’m sure it would be pretty difficult for you too if your teacher was a bald yellow and beady-eyed alien-like octopus with superhuman abilities.

The story follows the adventures of a group of students in kunugigaoka academy dubbed the E-class  (End class), the lowest of the educational chain and their exploits to assassinate their homeroom teacher who they call koro sensei, a yellow octopus alien-like creature who destroyed a large chunk of the moon, permanently turning it into a crescent. He announces he’ll destroy the Earth in the subsequent year unless killed before that time period, hence the reason for the E-class’ task. He, for some reason stubbornly insists on being their teacher and what more, the government has placed a bounty of 10 billion yen on his head. While possessing superhuman feats like speedy regeneration and the ability to move and fly at the incredible speed of Mach 20,  the E-Class, using special weapons developed by the government still tries to overcome that handicap and drive a weapon through their homeroom teacher.

The premise for Ansatsu kyoshitsu was quite peculiar but still intriguing. It seemed rather paradoxical that the being who possesses enough power to rend the moon in half would want to babysit a bunch of kids. There must be something up, right?. Well, the series did a good job of unwrapping that “something” with a delicate build-up, adventure, and careful delivery, dragging with it, a huge sack of humor and life lessons. Yeah, the anime was packed with comedic scenes, spreading said humor like butter on a bread slice. Which you have no choice but to gulp down hungrily, fixating your eyes to the brightly colored flashes of adventure on the screen, and getting absolved into the story as you follow E-class’ exploits in eliminating their unusual and seemingly unkillable educator.

As you follow the story and adventures of kunugigaoka academy’s misfits and their efforts to assassinate their teacher, you get drawn into the story, as the plot was also toned with emotional elements too. The “healthy” killing interactions and relationships (as koro sensei called it) between koro sensei and the students turned out to be a rather deep connection, lined with humor, joy, sadness and hearty lessons. Although as great as the series was in handling out humor, it wasn’t without its mistakes and flaws. There were episodes when the humor felt a little forced or just unnecessary. Although they were quite a few compared to how effortlessly it made one crack up in most of the episodes. Coupled with the fact that, it also had some serious moments too, I’d say, an overall balance was achieved.

The pace was rather smooth and the scenes were done well. The story also incorporated characters that were relatable and essential. I’ve been seen most anime with a large cast and a school setting with some rather unnecessary and sidelined characters. Assassination classroom’s plot and personalization, on the other hand, were eventful and pointedly necessary.

Despite having a somewhat large array of characters. The assassination classroom managed to develop each moderately well. Save for our yellow ever-grinning teacher, three major characters got a little bit of origin disclosure; Shiota Nagisa, the effeminate blue-haired boy who narrates the series and who at first looked more like a wimp but eventually turned out to be the most skilled “assassin” of the class. Karma Akabane, the smart delinquent and perpetual trouble maker who most likely is the favorite of majority and Kaede Kayano who’s back story was also slightly uncovered. The other characters, however, were still given a rather decent level of personalization and character development. I at least, by the end of the show was able to relatively point out each character and relate to them in some manner of reason.

There were also other teachers (assassins mostly) who also reinforced the dramatic happenings of the show. The ever serious Karasuma sensei from the ministry of defense who trained the E-class students in active combat, the sultry professional assassin, “bitch” sensei (as popularly called by the students) who, originally was disliked by the students but became a rather comfortable character in a short amount of time.

Each character was developed and explored fairly well, grounding the story furthermore with a steady mix of humor and emotional connection.

Now the art is quite generic with a lot of sharp, bright colors which at first for me didn’t really strike a memorable chord, but the timeliness of the animation and usage of certain reactions turned it around. And softened by comic relief, the art seemed just right for the comedic and humorous delivery. The character design was also moderately portrayed. Nothing special, but I guess it never really is in most school-related anime. The scenes, both humorous and serious were represented moderately well, and I especially enjoy how, during their tests and exams, the difficult questions were represented as monsters to vanquish. Those scenes were just appropriately placed and an overall enjoyment achieved.

The sounds really blend into the scenes, and each time gave an amazing feel to underlined tone and situation. The themes were duly matched and in line with the delivered sounds, creating a connection brimming with musical integrity.

The opening songs were also well done, performed by the voice actors themselves. Ah yes, the voice actors did justice to the characters portrayed and a few were iconic, filling the characters with life and committing them to memory. I mean, experienced voice actor like Fukuyama Jun who’s noted for his works as Lelouch Lamperouge and others, giving koro sensei that same fluidity and the iconic “nurufufufu” snugger.

I had a lot of fun watching the Assassination classroom and believe it’s a really decent anime. It had lessons, humor, emotional bursts and twists towards the end of the series. So it turned out rather well. Although, the genre is really not for all, checking it out and liking it is really something I believe is almost unavoidable, hence my rating of an 8/10.

I believe it’s an anime you can kick back with and relax, stretching yourself with laughter and connection with warm and relatable lessons.