KIMI NO NAWA (YOUR NAME) REVIEW 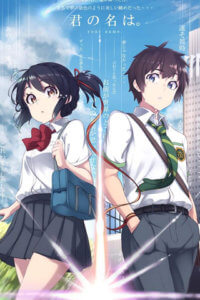 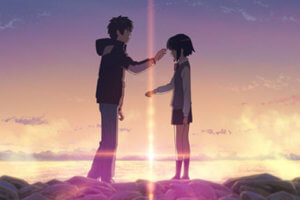 To save her. I wanted her to be alive.

Who was it? Who did I come to see?

Someone dear to me I don’t want to forget. I shouldn’t forget.

A reckless city boy, Taki, and a bored country girl, Mitsuha, share each other’s lives in this tale of fantasy and romance. In what feels like a surreal existence, Taki intermittently wakes up in Mitsuha’s body (and the world) and Mitsuha, in Taki’s. This oddity continues for a time until it dawns on both of them that the force at play is one that will drive them towards one greater purpose –to rewrite history and save lives of loved ones.

In an awe-inspiring drama, Kimi No Nawa envisages such a magical concept of time. Poignant as is, this anime will make your heartbeat with such intriguing sensation as it enwraps you in a preternatural idea simply conceived despite being complex in its own right. It captures such beautiful concepts as time, culture, pre-existence; and reminds us that this is just one big universe we barely understand and probably will never fully understand. The least we can do is marvel at the strange.

This review will be as spoiler-free as possible. Frankly, I wouldn’t want to be the arse that ruins the magic of the animation for you. So here’s a quick run-through with the most minimal spoilers (LOL):

There’s the curious girl. Mitsuha is a high school kid who lives in a fictional town called Itomori. She is the typical ‘Belle’ (Beauty and the beast) kind of girl —she feels choked in this small town, and just wants a city life for a change. She lives with her darling sister and her pious grandmother who pretty much raised her in the family tradition of the Miyamizu Shrine god. Occasionally she gets overwhelmed by the whole ancient culture, small-town affair and finds herself wishing with much longing to be “a handsome city boy” in her next life.

Then there’s the boy. Taki is a high school kid who lives in the big city, Tokyo. He is just a normal kid who works shifts from school at a restaurant to make ends meet. He has two good friends, a pretty simple life, and a not-so-secret crush on a senior at his place of work, all before becoming aware that he had been living someone else’s life in his dreams.

Nobody knows when exactly the switching began. The only cue was both Taki and Mitsuha reflecting on how they dream about someone else’s lives and then wake up with fading memories of the dream. They begin to realize that these dreams might be more real than they thought when friends and family start complaining strangely about them. Turns out, each time both spend in these “dreams” in the other’s body and the world, is, in fact, an entire day in reality away from their own actual world. LOL. You probably don’t get that, and it’s probably for the best. As I said, I’m trying to make this review as spoiler-free as possible.

In any case, they both found out ways of making things easy for each other by setting rules and cues to guide the other when the switching takes place and one has to assume the other’s life. Just at the point when both were getting attached to each other’s world, the switching stopped.

Taki was distressed. He was starting to get rather fond of this girl whose body he goes into, whose world he was getting more attached to. Where was she? Where was Mitsuha? Why had she not come back? In a desperate attempt to find answers to these questions, he unravels a much sickening fact about her and the events surrounding the last day of their switch that creeps his heart.

“That day when the stars came falling

It was almost as if…

As if a scene from a dream

Nothing more, nothing less

Then a beautiful view.”

Kimi No Nawa basically has your attention for the entire 1 hour 46 minutes of the anime runtime. It starts off on a really appealing turn with Taki and Mitsuha on two very different parts of Japan, revealing signs of a connection between their states of mind. Both have this longing they could never understand, memories they try to hold on to but could never remember. Always wondering, looking, seeking for something, someone. Someone they already met? Maybe. Kimi No Nawa is perfectly scripted. Every statement, every word is carefully designed to draw you in. By all means, once again, I give my respects to Makoto Shinkai. The story just keeps building up into various stages of ‘epic’.

The anime avoided swerving too much in terms of explanation as regards how the strange events came to be. How dreams brought two different individuals from entirely different parts of a country (and entirely different time) together. But they didn’t shy totally away from this, as they offered a clue as pertaining to the mystical nature of the occurrence, and nothing science could account for. They connected the mystical nature of the events to two beautiful concepts —twilight and the god ‘Musubi’. Early in the anime, the concept of twilight was introduced as the period “when it’s neither day nor night. When the world blurs and one might encounter something not human”. It was later called “Kataware – Doki” later in the anime. And then the god “Musubi” is more like an embodiment of time itself. These concepts are beautifully adopted to add such a magical feel to the anime.

Makoto Shinkai really has a knack for fantasy drama with emotional depth. This is notable in his works like 5centimeters Per Second, and Hoshi no Koe. Kimi No Nawa is another pot load of the emotion-whelming plot. At the critical stage of the story arc, when our protagonists find their connection is geared to one purpose —preventing one historical event and changing everything for good –they both struggle with fading memories, trying to hold on to some piece of information while acting up to fulfill this purpose. The universe gave them an opportunity, but it was only for one goal. And as they neared successful accomplishment of this goal or blatant failure, the universe takes from them that which was given —the experience, the shared thoughts, the memories. This was only quite mandatory as the balance is pertinent. Both struggles in tears and heartbreak to fight this fate and hold on to what beauty they share, but in the end.. What happened was inevitable. And no, I did not just tell you what happened. LOL.

“…the flow of time itself

They converge and take shape

I love the way the characters are designed —simple and relatable. I have seen my fair share of anime with overly complex protagonists, which usually appear somewhat absurd to me. I like the fact that Kimi No Nawa tries, successfully, to build such a captivating story around a bunch of very simple characters. Characters such as Taki’s crush Ms. Okudera, and his close friend Tsukasa; and Mitsuha’s close friend Tessie all add lightness and fun to the anime.

The art is subtle, the animation, brilliant and the effects, simply absorbing.

Kimi No Nawa soundtracks are originally composed for the anime and sung by the band ‘Radwimp’. These are OST’s you want to keep listening to foreverrrr! They are beautiful. Beginning with the opening theme “Yume Tourou” that basically makes you understand that you’re in for one heck of a magical ride with Kimi No Nawa. Then the interlude theme “Zen Zen Zens” which was played at the point when it becomes strikingly glaring to both Taki and Mitsuha that they are not just having dreams of each other’s lives but are actually living each other’s lives in reality; the song just gets you uncontrollably excited for what comes next. Then there’s my favorite of all the OSTs, the insert song theme “Sparkle” which adds many emotions to the ‘Twilight arc’ as I like to call it, where both protagonists struggle unyieldingly to keep the memory of each other’s name. Finally, the closing theme “Nandemonaiya”, a perfect ST to bring a drama such as this to a close. The lyrics of each song has much depth, that you’re reminded that you’re not watching just any kind of anime. This is one of the greatest anime ever. Other sounds used throughout the anime too are well befitting for the events of their use.

To wrap up this review, I must say, Kimi No Nawa is one of those anime I could watch over and over and over again, and each time it only gets more beautiful. It is my favorite anime yet, perfect for me in every sense. I score it 10/10. Yeah, I STRONGLY recommend this anime for anyone and everyone!