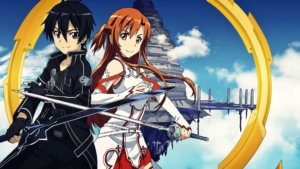 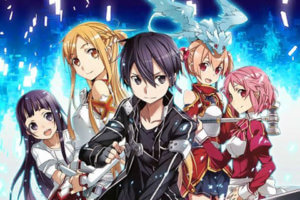 See, when I first heard about Sword Art Online, my first impression about what it’s going to be like was an immensely fun-driven type anime (you know, more like One Piece) with more reasons to laugh than reasons to get all emotional (NOTE: EVERY anime will give you at least one or two reasons to get emotional!). Anyway, I was wrong! Although SAO has very few tragic events compared to mainstream anime like Naruto (where about 50% of your favorite characters die), it doesn’t particularly tickle you to laughter either. Rather, it is has a quite serious tone (more like the Fate series). Sword Art Online is a typical fantasy, adventure, a thriller with quite a number of characters you can relate with. It may not be a fun anime, but it’s definitely an anime you’d want to keep watching after episode 1.

Well, without much ado, let’s dive right into the world of online gaming. YEAAHH!

The protagonist of this fantasy story is a boy named Kazuto “Kirito” Kirigaya. Set in the year 2022, Kirito and thousands of people are drawn to a virtual reality MMORPG (Massively Multiplayer Online Role-Playing Game) called Sword Art Online. Players are connected to the virtual gaming world via a helmet-like device called “NerveGear”, a console that simulates the in-game character controls by redirecting brain signals (i.e the players can control their in-game character with their mind.)

The gaming world in Sword Art Online I is called “Aincrad”, created by developer Akihiko Kayaba. The season begins with 10,000 players logging into SAO’s mainframe cyberspace for the first time following the official and final installment of the game, only to find out later that they are unable to log out. Ending the first episode is an “Avatar” appearance of Akihiko Kayaba, legit stating that the people have been trapped in the game, and would be unable to log out until they win the game. He also significantly adds that death in the game means death in the real world, due to the NerveGear connection. Due to this turn of events, the game was tagged “death game”. Having dropped these terrifying news, the Avatar vanished, leaving a confused and horrified crowd of players in the beginning floor.

I was a bit unsure about this anime really because it starts really slow and kind of uninteresting. But seeing the intense scene of Akihiko’s absurdly huge Avatar appear to the players under a red sky, and hearing these new absorbing set of rules was a game-changer for me. At that moment, I knew, obviously, an adventure is about to start, an adventure of players’ relentless efforts to clear the floors, and God knows what awaits them in each. There’s also a part of me wanting to know more about this strange new world of Aincrad, and I was about to explore all of it with these players. So, suddenly I’m a fan of Sword Art Online! YEAH!

Now the entirety of Aincrad is basically a huge castle made of stone and steel floating in an endless sky and containing 100 floors. To win the game, you have to clear all the floors, which typically entails having to fight a number of grim creatures, before getting to face, ultimately, the masters of each floor, each master getting more powerful and fatal the higher up the castle you go. 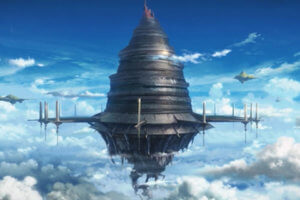 Back to the protagonist now,

Kirito happens (lucky enough) to be one of 1000 testers in the game’s previous closed beta. So he was basically a badass in this final installment of the game due to his previous VR gaming experience. For a good fair part of the season, he was a lone player, quietly clearing the floors all by himself, unlocking more cool abilities and constantly upgrading his character. In no time he was well respected as a formidable player.

He wasn’t alone much though. He meets a lot of really interesting characters along his journey:

SILICA, one of the rare Beast Tamers of SAO, and owner of one named Pina (a feathery dragon) who dies protecting her. Kirito helps her in looking for the Pneuma flower to which they must use within three days to revive Pina less the poor dragon be gone forever. The two of them journeyed to find the flower at the Hill of Memories. Despite encountering monsters such as the Garish Gerbora and Land Anemone, they reached their goal. It all ends well, as they get the flower just in time and brought back the dragon, and Silica departs saying she hopes she will meet Kirito one day in the real world when ‘all these are over’.

LISBETH is one of my favorite characters, that’s probably due, in part, to the unlikely bond she sparked between Kirito and herself. Although a relationship couldn’t work between them, it was still invigorating watching the brief romance between those two. Lisbeth is a blacksmith requested by Kirito to make a high-level sword. But she states that such a sword requires a special ore. And so another quest began! The duo set out, traveling through weird forest zones, and later through cold snowy mountains where they encountered X’rphan the White Wyrm, a giant dragon-like monster. Anyway, at the end of the episode, they are able to get the ore needed back to Lisbeth’s workshop, and Lisbeth was able to create a rather glorious sward which was called ‘Dark Repulser’ for Kirito.

Lisbeth holding up the ore used to make Dark Repulser 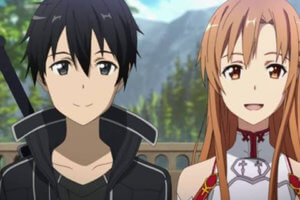 ASUNA. The girl that finally took hold of Kirito’s heart in a firm grip, he couldn’t resist falling in love. Kirito had met her once somewhat at the beginning of the season. She used to be a lone player too, just like Kirito, but heading Kirito’s advice she later joined a guild (a group of players who form a team to clear the floors of the game together). When Kirito meets her again, later on, she was the 2nd in command of the most powerful guild in Aincrad named “Knights of Blood” led by the believed the best warrior of Aincrad, Heathcliff.

Well to me, the best thing about this series is what Kirito and Asuna have going. They are both badass warriors, coming together, and ultimately forming a Power Couple. Sweetest thing! And yeah, they both get married..(still in the game of course).

The final battle of the season (Well, second to the final battle, technically) is with a terrible terrible beast called The Skull Reaper, who could kill a player with one strike. It took Kirito, Asuna, Heathcliff, along with the entire Knights of Blood guild to kill this monster. After the battle with the Skull Reaper, Kirito notices that Heathcliff’s health bar never went down to the yellow zone, even though he was hit a couple of times. Kirito further confirmed his instincts by trying to kill Heathcliff, who didn’t seem affected. Then it became clear that the character Heathcliff had been transformed into an immortal object, a property that could only be bestowed upon program administrators. And on to the shocking moment!

It turns out Heathcliff is, as a matter of fact, Kayaba Akihiko, the game creator who had trapped them all in the game 2 years ago. He was also a part of the game, he had been the whole time.

Kayaba had always dreamt of a world where you could be anybody you want to be; a mysterious fantasy world where you could take on REAL adventures. He had managed to create that world of his dreams in SAO, Aincrad. He wanted the world to also taste of his beautiful new world. I guess he believed he would be improving human’s love and value of life by helping them experience a completely different life filled with adventures and quests, where you can be anybody, do whatever, as long as you remain alive. His methods might be rather extreme, but in the end, his intentions were not all bad.

Anyway, after realizing he has been busted, his big secret out, Heathcliff (Kayaba Akihiko) immobilized everyone with the authority of the system administrator, and challenged only Kirito to a one-on-one duel; there and then changing the rules: If Kirito could beat him, the players won’t have to go all the way to the 100th floor, as the game will be over, and everyone can safely logout. Of course, Kirito accepted the challenge.

The fight between Kirito and Heathcliff wasn’t your typical epic Naruto type battle, but it sure was something! In the end, both of them were dead, Kirito killed by Heathcliff, and Heathcliff in turn killed by Kirito using Asuna’s sword.

Just as he had said, the game was over the moment both Heathcliff and Kirito vanished. Everyone is now able to log out, and return into the real world, after 2 years!

With Aincrad destroyed (which is the final phase of the game, upon elimination of the final boss, which was Heathcliff), and Kayaba appearing to Kirito and Asuna in an alternate world to explain his motives, before vanishing into the departed world, the two lovers were no more dead, but alive and able to logo out too.

But this tale is still far from over…

Skip to the real world,

Kirito is now logged out of the game. He later finds out that 300 SAO players remain trapped in their NerveGear not able to complete their logout process. One of the 300, so happens to be Asuna! So another quest yet begins. Kirito definitely won’t rest until he has Asuna back in his arms.

Asuna still trapped in her NerveGear

And that ends my Sword Art Online review. I hope y’all enjoyed reading.