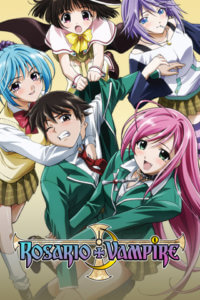 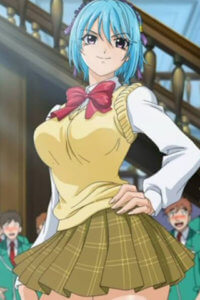 Tsukune gets a ‘lucky’ admission into a high school. On getting into the school, he finds that he has drifted away from the natural world of humans and into the dark lands of supernatural beings. He quickly makes friends with a beautiful vampire and subsequently other magical beings, and a romantic triangle develops between all of them. He has to keep his human identity secret amid rising threats from other monsters if he would survive in this school. But no matter what happens, his ‘girlfriends’ will always be there to get him out of trouble.

Things turn around for 15-year-old Aono Tsukune, who was finding it hard to make his grades and move on to high school after his dad mischievously procures an admission form into a high school for him. Now he no longer has to repeat the year but will become a proud high school student of Youkai Academy by summer-fall.

On the bus, heading to Youkai Academy, Tsukune is first hinted of the horror that awaited him, as the driver described the school as terrifying. A dark bridge marked the exit from the human realm, and into the world of monsters. It was a bright summer day all before the driver drove under the dark bridge. On getting out the other end of the bridge, Tsukune is welcomed by creepy nightfall. The land representing the world of creatures was like a hill flanked by seas stained in blood (Lol, okay I really don’t know for a fact that it is blood, but the sea is colored red, so that’s a possibility. Besides ‘stained in blood’ has a nice dramatic ring to it.)

By now the driver is far gone and Tsukune is left by his lonesome in this freaky zone. While striding about, scared out of his guts, and overthinking things, someone on a bicycle crashes into him. The person turned out to be an amazingly beautiful girl who introduces herself to be a vampire. She is instantly drawn in by Tsukune’s ‘scent’ after she tries to help him clean blood trickling from his nose as a result of the accident. She couldn’t help herself and ends up biting the lad to have his blood. She made sure not to hurt him though. Seeing that this is a nice person, there and there, Tsukune makes his first friend, a vampire, and her name was Akashiya Moka.

And the story builds from there…

There’s nothing particularly intriguing about Rosario Vampire really. Yet I find myself drawn to it and rather enjoying it too. The plot is nothing spectacular. It is absurd and childish in fact. In every episode, a new villain is introduced, and at the end of the episode, the villain is defeated in pretty much the same way –Moka kicking ass in her all too powerful vampiric form

Basically, Moka has two personalities. One is the sweet cute girl who just happens to be nice to everyone. Then the other is her true vampiric form. It’s like a really old, hence really powerful vampire spirit is locked up inside of her. There’s this rosary she always has on. Whenever the rosary is torn off her neck, she switches to her vampiric form. In this form, she’s mean and proud and more badass. Her vampiric form is battle-inclined, she lives for drawing blood from the enemy. Occasionally she speaks to gentle Moka in her heart. If we all have an angel version of us and devil version speaking to us every minute, Moka only has the devil version, and that’s her vampiric side.

As I said, the plot is not spectacular, but Rosario Vampire is just an anime you want to keep watching once you’ve started. It sets this cool tone that just makes it appropriate for chilling while binging the anime. There are interesting elements in the plot arc though. Like the creatures; while some are just absurd and disgusting, some of the creatures are actually pretty cool. I especially like the succubus (not only for her sexiness, Lol). Okay now that I think of it, so far, only the major characters have nice creature design. The villains, in creature form, are usually ugly and lame. That’s not fair.

The plot has a lot of fan service. With all the cheesy stuff being displayed; like bouncing boobs, panties, and ridiculously perverted shot angles. Maybe I enjoy this a bit though, cos it sort of add to the juiciness of the anime. Although there were complaints from a lot of fans of the manga series, and I heard the anime was even censored on two networks.

Other characters introduced in subsequent episodes have relatively different personalities. There’s the succubus, Kurumu Kurono, she is hot as hell with big boobs and all. She’s less

friendly than Moka and she happens to know how to get a stronghold on Tsukune, and pretty much any other boy, whenever she wants. That’s basically her specialty (being a succubus and all). She has other cool features though, like dark wings, and considerable strength. Then there’s the witchling, Yukari Sendou. She is just a kid who happens to be smarter than her age, so she finds herself in a class filled with much older people. Yukari had haters in colleague creatures who have the deep-rooted believe that witches are too close in resemblance to humans. This almost lands her in trouble. In a way, she ends up being saved by Tsukune, and she falls for him. Yeah, it’s pretty much that easy. What all the major characters have in common is that ultimately they all have a crush on Tsukune. Sucks!

The characters, in general, are not bad. They are really interesting. And the protagonist, although being weak and useless is pretty relatable too. The anime constantly shows us how stressed Tsukune is, and how he’s pretty uncomfortable with being constantly rescued by girls., how he longed to be stronger. We also see that somehow he’s fallen for Moka, and that might just be the reason he hasn’t fled the school of horrors.

The animation is not bad. Although it feels like a lost and now found 1990’s anime, even though it was created in 2008. Much older anime like Death Note, Naruto, even Bleach, had better animation.

The sound is nothing thrilling. It’s made up of really classic kind of sounds.

Anyway, I kind of enjoy the anime, but really, it’s not all cool, it’s just not. There are way better anime to spend your evening watching. I score it 5/10.