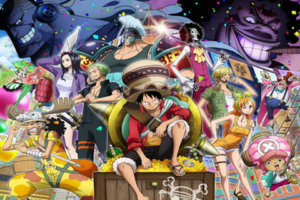 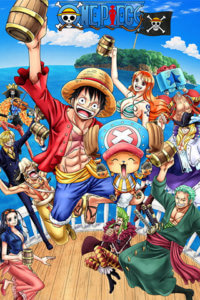 In a world where pirates are outlaws and nothing but trouble, and tagged enemies of the law, a lad by the name Monkey D. Luffy sets out to begin his own adventure. His quest takes him literally across the globe, exploring the vast blue of the seas and oceans, and the beauty of lands abroad and unknown. He recruits a team of uniquely weird, mostly crazed and especially talented individuals to join him in his adventure, and help him become the greatest pirate ever known.

One Piece is an adventure thriller with a classic style of animation and humor meant to allow a spectacular mix of drama and fun.

As typical of most mainstream shounen anime, One Piece is one of the oldest anime there is and one of the longest-running anime series with over 800+ episodes. I have read a couple of reviews about this anime, and one thing most people keep complaining about is the ridiculously childish nature of it. With a build-up of really funny-looking characters and overly dramatic lines, it’s easy to see why most will say it is childish. And the fact that the anime has refused to grow in art and animation style over the years, unlike equally mainstream anime like Naruto and Bleach, makes it look like the production company is deliberately lacking. So yea although the anime has received a huge amount of love from fans across the globe, it is not without its haters. Now, where does that leave me?

Well, I can tell you this much: I definitely am not a hater.

It all begins with some crack head of a pirate called Gol D. Roger. He was known as the (king of the sea) “Pirate King”. Over the years he had amassed so much wealth and fame… The fun tale begins when he decides to have himself executed by the law (naturally Pirates are enemies of the law in this world). Before he is decapitated he announces that he has left a treasure somewhere in the middle of the world, somewhere called the “grand line”, for whoever is brave enough to seek it. And thus began the age of crazed pirates and over-zealot sea lords and captains, all bent on one purpose: to get to the grand line and claim the treasure.

In the wake of this madness, a young man by the name Monkey D. Luffy finds inspiration to travel the seas and oceans, find this grand line said to be at a stretch of oceans greatly feared by every pirate that ever found it  as it is called the ‘Pirate graveyard’, and claim Gol D. Roger’s treasure. Something interesting about this Luffy is his disinterest in wealth whatsoever. His motivation comes purely from sheer craving for some wild adventure. He sought first to build his crew ‘Straw Hat Pirates’, while finding a ship, and then sail in wild hunt of the greatest treasure ever. Over various story arcs, he encounters various kinds of interesting people –a swordsman, a navigator and a charming thief, a sniper and liar, and a flirty sea chef. They acquire a ship named the ‘Going Merry’. Subsequent adventures further brought in more team players including an archaeologist and former assassin, a cyborg shipwright and more.

Okay, but really though…

The anime follows the cliché style where, with whatever happens, the good guy will always win, either after revealing some unexpected trump card as the fight draws to an end or has suddenly shown some absurd resolve to not lose the fight no matter what. And then no matter how much the good guy is beaten, even sometimes to the point of death (literally to the point of death! As in death! Where they should actually BE dead!), he still somehow gets up and beats the villain who might happen to still be in his full strength. That’s just bullshit. It can be tiring knowing that every fight ends the same way, especially with Luffy; anyways, he wins and becomes considerably more powerful than he was before.

And the fight scenes can be awfully unnecessarily long! There is usually a lot of talking, usually from the villain, probably explaining why and how he ended up being a bad guy (yeah they all blame it on circumstances); followed by flashbacks. Don’t get me wrong, I enjoy the flashbacks, and stories and all, but sometimes they just seem to lack substance and fail to absorb you in, and you just feel like “GET TO THE POINT ALREADY!” The animations sequences during the fight scenes though are really cool, with mind-blowing effects and all.

Now unto why I really love this anime,

One Piece captures what true adventure should be. With story arcs taking you from strange towns and suburbs to foreign seas and oceans, to scorching deserts, and snowy mountains, it really is hard to miss the fun, the craziness, the ever-thrilling experience this one fantasy story invents.

One Piece universe is spectacularly filled with many interesting cryptids. There are the ‘Fishmen’, a race of fish/human hybrids; dwarves; Minkmen, a race of humanoid animals; and there are giants. And of course there are fey abilities too, some found in what is called a ‘Devil Fruit’ and some in a phenomenon know as ‘Haki’. A Devil Fruit is literally a fruit that grants the eater absurdly powerful abilities. They are said to be incarnations of the sea devil himself, and as a result, those who eat of a Devil Fruit are not able to swim in sea water and may die if they stay too long underwater.

Now Haki, contrary to Devil Fruit is some sort of mystical energy that every living being in One Piece universe possesses. It is naturally dormant in everyone, but few manage to awaken its abilities. Haki users are placed on three different levels —those able to sense spiritual energy (Kembunshoku haki), those able to use life force to enhance their physical strength (Busoshoku Haki), and those able to overpower enemies’ willpower (Haoshoku Haki). The Haoshoku Haki is the rarest manifestation of the Haki abilities. There are some overpowered characters who happen to be able to manifest the haki in all it’s three stages. Yeah blah blah blah… All I’m saying is: THERE’S A WHOLE LOT TO BE EXCITED ABOUT IN ONE PIECE.

YES, the humor! One thing everyone, hater and lover, alike can agree upon is that One Piece is immensely humor-packed. Most will complain about this, and point that it makes the anime all the more childish and ridiculous. Not me though. I love the humor. I really appreciate the timing. As obviously predominant as it is in the anime, the humor is not loosely adopted. The production made sure to avoid using humor in strategic places where emotions should swirl or when solemnness should prevail, thereby avoiding watering down many serious ‘pay-close-attention’ moments. This makes the anime a perfect blend of humor and drama.

What can I say?

You could never forget a One Piece character. In any case, to say One Piece has the largest gallery of characters won’t be far-fetched. One thing the anime, noticeably, strongly works on is character arc and development for their major characters. Every character is very unique in design. It’s remarkable how they all stand out —the impaired, free-spirited and Devil Fruit powered Luffy, the profound swordsman Zoro who literally sleeps every chance he gets, the womanizing chef Sanji who is a sucker for damsels (not necessarily is distress), Usopp the liar and apparently badass with a catapult, and Nami, skilled navigator, pretty good thief, and the only girl in the group. Every character has a back story that is well-formed and developed over enough episode runs.  The villains though… The majority of the villains pretty much have the same attribute of being intimidatingly big and cocky, another quirk. But that’s forgettable when you get to see a dynamic between members of team Luffy. I especially love the understanding developed between Luffy and his two closest teammates Zoro and Sanji. These three are very different in not a few numbers of ways and are seen disagreeing most of the time. But when the need is, they manage to read themselves rather well and play team. Even characters that make an appearance only a few times in entire arcs leave long-lasting impressions. You just have to
give it for this anime. It is quite a spot-on anime with its vast gallery of characters.

Some fans have complained about there not being enough deaths (with just about two or so people dying all through the entire anime) which is ridiculous as that in no way preach the reality of true life events considering the various deadly encounters and intense battles. I understand why folks might find this baffling. But I believe the basic goal of One Piece really is to excite viewers with captivating stories that can be fun all the same. This has greatly accomplished.

The sounds are, yea, old-fashioned too. I like the way every character of Straw Hat Pirates has their own signatory sound. Like when a sound is introduced at certain episode breaks, you already know the character that will be at the center of whatever comes next after the break. Generally, the original soundtracks are good in that they really suit the desired atmosphere. The issue I have here though, is there are times when the production excludes the use of sounds, most especially during fight scenes. Certain fight scenes proceed for long without any background sound, just voices and effect sounds; this sort of makes the whole thing wacky and uninteresting.

Well all that being said, here’s one for a conclusion

I love One Piece! I find it amazing how with an unconventional style, a bizarre world is invented with most absurd story arcs and yet such thrill, such awesomeness is conceived. That is art in its beauty fam. One Piece is certainly one of my top favorite anime of all time. I rate it 8/10. And I totally recommend it to you. Yeah, the 800+ episodes might seem too much, but don’t let that scare you off. The world of Devil fruits and pirates and seas and Islands and vast fey creatures isn’t one you want to be excluded from. You’ll be missing a whole lot.