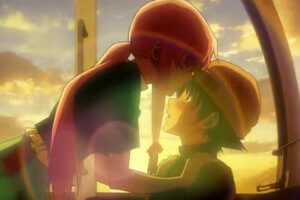 Ever wondered how it would be if you were able to see certain things before they transpire, check the answers to that test you so much dread before it becomes official?

Well, in the case of our MC Yukiteru, he was privileged to relish the luxury of that kind of future knowledge, was it what he expected? , well…

Amano Yukiteru is a 14-year-old socially detached loner who observes and records occurrences around him on his phone. A diary he calls it. His only friends are the imaginary god of time and space, Deus Ex Machina and his puckish servant murumuru. His life takes a sharp and drastic turn when his “diary” is able to predict the future of random happenings around him, courtesy of Deus, who turns out to be pretty far from an imaginary being after all.

What more, a steeper turn still, when he discovers there are eleven others like himself, each with a diary that predicts the future in peculiar transitions. And Deus has made it into a battle royal survival game of 90 days preceding an apocalyptic end, wherein whoever’s the last man standing gets the grand price; his all-so powerful throne of god. Further still, yukiteru’s life twists even more, when Deus shows the others he is more favored, making him (yukiteru) on the topmost kill list of everyone in the ‘survival game’. Save for Gasai Yuno; a pink-haired cute classmate of his who fell in love with him a year before as a result of a promise between them; a promise even he forgot. The downside though, Yuno is a possessive “yandere” and as a result, is a perpetual stalker and a psychopath. Although her ‘love’ and one-year stalking of yukiteru paid off as she possesses ‘the yukiteru diary’ which predicts yukiteru’s future in the interval of 10 minutes. And she’s determined to protect yukiteru with it, no matter the cost.

So Mirai Nikki is a downright bloody anime and psychological thriller, although I really don’t see why it’s in the horror genre, as the scenes weren’t that horrific. Sure there were gory sights, undulating motions of trauma and heaps of body bags but, no. It didn’t pack enough “haunting power” to qualify as horror (not a big fan of the genre though). Mirai Nikki had a pretty decent story, and the continuity was also fluid and rightly paced. Stripping it bare, down to its core though, it’s basically a romance anime, but yeah with a lot more blood and “compacted bodies” than your average “kiss and cuddle”. Even so, Mirai Nikki had its humorous times, although quite a few, relative to flashes of a bang! Bam! Swish! splosh! and a handful of blood, spluttering all over the place.

The storyline is pretty unique though; diaries? really?  Yeah, the angle was pretty peculiar and intriguing, and as you continue from one episode to the next, it only got better as secrets unveil and reasons; unraveled. Even though they might be pretty predictable if you’re one with your eye out for details, but it still was fun to see those secrets, and reasons exposed on-screen. Especially with the psychopathic exploits of our pink-haired yandere, who seem to have monopolized the word itself and is almost more popular than the show.

One time she’s a bloody maniac wreaking havoc and riding terror like a pony through a storm of trouble and battered bodies, the next she’s this sweet plushy thing that can’t seem to get enough of yukiteru’s gaze. The transitions were always delightful to watch. As Yuno was mostly the star of the show and gave a certain “edge” to the series, some other characters at certain times were shaky and almost not in line with the happenings at those times, making the anime taken less serious than it should at those intervals. Still, the whole limb severing and mindless decapitation served some sort of balance to the awkward “out-of-moment” Characterization. It was a rather fun and enjoyable anime though, the story progression and plot description were laid out pretty well, although, towards the end, they felt compacted. Not rushed, but, like trying to force a whole bunch of clothes into a tiny wardrobe. Yeah, it felt like, they were trying to bind all the explanations that could have been juicy in slow delivery and sudden suspense and just deliver it in those few episodes. Like I said though, it felt cramped, but not rushed. So it still had a decent thrilling visage. The plot was delightful and each episode kept measuring up to the last in how well delivered and smoothly placed it was. The whole battle royal situation also added to the excitement of suspenseful expectations and was further reinforced with themes like a tragedy, romance, slight humor, and predominantly, a whole lotta crazy.

The characters were actually pretty decent and considering it’s a 2011 anime, the character design wasn’t that bad. Although nothing memorable or unique. Some characters were a hit and miss while the others thrived and could be described as “decent “.

Amano yukiteru, the main male protagonist is a pretty pathetic character, which like most people was a problem for me as well. His wimpiness and timid inconsistencies were a pretty sorry sight. I believe that made him a lot more relatable though. And one cannot exactly expect him to excitedly participate in a game where 90% of the members are fixated on snuffing the life out of him (I know I won’t). All in all, the character development was good and also rightly defined. We got to see him unfold and adapt fully. Even though it was all due to plot conveniences, it still was efficient and well-received.  Although Gasai yuno was the star of the series, it is a popular fan favorite, despite her psychopathic nature and emotional instability. She only seemed to care for yukiteru( or as she refers, Yukki). She would do anything and everything to keep yukiteru from harm and get rid of whatever might come between her lover and herself. She claimed she’d even sacrifice herself for their “love” (what a girl right?). Anything at all, even if it involves strapping him to a chair for his own protection or mindlessly slaughtering anyone in the “potential danger radius”, be it a family member, friend or foe. Although as a result of this, she protected yukiteru severally and saved him from even the clutches of death.

The other main casts who got somewhat decent screentime were also given solid lining,

And resonance with the viewer was established. Characters like, the 9th diary user and the secondary female protagonist; Uryu Minene who’s the reason for wanting to become god was to destroy all religion as her parents were murdered in a web of the religious feud. Although she changed her mind after befriending Yukiteru and his friends.

Yukiteru’s friends too (well, he was able to make friends).

In the space of time wherein, they knew one another, they encountered many situations and had adventures. Each character was pretty simple and even though there wasn’t so much depth, it wasn’t shallow, hence the relatable characters, whose motives, actions and decisions were absolved into the story, making it full and relatively fun to watch. The eleven diary holders were also explored. Their origins, motives for winning the survival game and personalities were visited and reached out to the viewers too. Even though some of them were pretty generic and sidelined. Like the third diary holder, who was barely given any screen time, a few others were also without much “screen flare” and were pretty bland. Those that DID get screen time and were mainly essential to the plot made for a smooth and solid watch with backgrounds and connections that were quite easy to follow.

The visuals of Mirai Nikki were good. Not enough atmosphere for the mellow, precise colors though, which as a result reduced the “terrifying ability” it was meant to possess as a horror series.

So scenes weren’t really as horrific as they should. Well for a show of its time, I guess, not so much is to be expected, still, I’ve seen better colors and animation fluidity in some anime produced the same year. I’d say the animation was moderate in any case.

The music wasn’t all that bad either. Although the soundtracks were not all that peculiar and were pretty generic, they just seem to fade into the background and were not so memorable. The first opening song was quite nice and seemed to establish a flow as it seeped into the story.

And the voice acting was quite good too. The lines were delivered well and precisely.

The series for me was enjoyable. It had an interesting premise, and it did a good job of following that flow and establishing a sense of curiosity. I feel the last few episodes were compacted, as I’ve said earlier. This kind of reduced building excitement from earlier episodes. Even so, the end was still quite acceptable.

So if you like crazy chicks against more crazy chicks, bloody clothes and romance? … Well, you’ve picked the right anime.