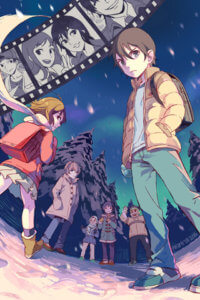 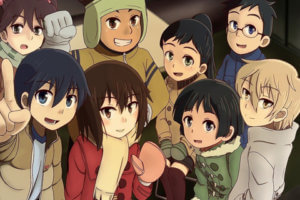 The story follows Satoru Fujinuma, a 29-year-old pizza delivery guy and aspiring manga artist who possesses an ability that sends him back in time (a phenomenon he calls revival), usually, 1 to 5 minutes before something bad happens and as a result, has prevented bad occurrences from transpiring severally. When his mother is murdered by an unknown assailant and he’s framed for it, this time revival takes him back, 18 years into the past when he’s still in middle school. This allows him the opportunity of preventing the serial abduction cases and consequent deaths of two of his classmates and a girl from another school. As the crimes are linked by the same assailant, preventing this tragic past would save his mother’s life in the present and clear his name.

Boku Dake ga inai machi (literally, “The town without me”) also titled Erased is arguably one of the best and most popular anime of winter 2016.

It’s a Mystery and science fiction thriller which hits off with a high note on suspense right from the first episode. The path to a captivating reveal and the story was wrapped up carefully with underlying emotional and intricate moments of dramatic wonder. Much like an anime like steins gate, Erased centers around the main protagonist going back in time to prevent a loved one from death, although much unlike steins gate

Although this approach was met with much criticism has it wasn’t fully explained how Satoru came about this “revival” phenomenon. However, I believe the series made up for the lack of depth into such a theme as its scenes were careful and suspenseful in delivery. I loved this about Erased; the way the story was built up and the reveal seemed just there at the top of a mountain, and you just have no choice but keep climbing, keep watching, keep getting soaked in and kept at the edge of your seat. The plot was underlined with some humorous turns too and a fair, thin membrane of romance to further compliment the already captivating narrative.

Even as near perfect as the series is, it isn’t without its flaws. One of these flaws is the fact that the story is a little bit laden with plot conveniences. The fact that Satoru’s ability wasn’t delved into, and we know nothing of the rules and origin. This allowed the writers to manipulate the story however they liked. It was conveniently used to manipulate the story without much explanation, which led to the latter part of the series being a little bit predictable. If you’re attentive to details that are. Even though as the later part of the series was a bit depreciated, the suspenseful build-up and narrative flow in the first part of the series are enough to carry one all through, enjoying the dramatic and on-screen cinematic brilliance. The story has emotional themes and is also linked with tragic and near-tragic moments that allow you to empathize with the characters and enjoy the reality displayed on the screen.

Satoru Fujinuma, the main protagonist is a 29-year-old aspiring manga artist who works at oasis pizza as a delivery man. He is indifferent to society and seems somewhat bored and detached. Although he seems to possess a sense of justice as he helps prevent trouble every time “revival” occurs. He is affected by his past as a number of his classmates were involved in abductions and subsequently killed and he feels he could have done more to save the life of one classmate (kayo hinazuki) who he believed was abducted and murdered as a result of her always being alone. He believed he could have prevented it by befriending her and so is plagued by this feeling of responsibility. He was framed for his mother’s death but as his

“revival” was stretched 18years into the past resolved to find the assailant responsible and save his childhood classmates.

Airi Katagiri, a high school student who also works in Oasi pizza and upon witnessing Satoru saving a young boy’s life becomes involved in his life until and after his mother was murdered. She was one of the few people who believed and trusted Satoru when he was framed for his mother’s death and helped him during that time. As a result, she was targeted and put in a life-threatening situation by the attacker but was saved by Satoru. She somewhat became a source of inspiration and motivation for Satoru in his travel and escapades in the past

Kayo Hinazuki, one of Satoru’s middle school classmates and the first in the case of serial abductions. It was revealed that kayo was a subject of victimization and abuse at the hands of her irresponsible mother. This made her an emotionally distant and perpetual loner. Satoru tried to save her after his mother was killed and he “traveled” to the past. His friendly demeanor made her lower her emotional barrier and they consequently became friends as Satoru struggles to change her fate and ultimately the future.

Sachiko Fujinuma, Satoru’s mother, seen as a caring, loving, kind and understanding mother who as a result of Satoru’s ability discovers the assailant responsible for the serial abduction cases 18 years prior. This led to her murder and was unable to disclose the identity of the culprit. She, upon finding out the identity of the kidnapper blamed herself for not believing Satoru back then about Shiratori Jun (an adult who befriended Satoru as a kid and was popularly called Yuuki) not being the culprit

There were other characters in the series who were involved in the intricate and delicately unravel and mysterious story like Kenya Kobayashi, Satoru’s classmate who is quite smart and possesses a strong sense of justice. He noticed something had changed in Satoru after the revival and he also assisted in Satoru’s plans along with the effeminate Hiromi Sugita and other classmates. There was also Gaku Shiratori, Satoru’s 5th-grade homeroom teacher, who also assisted Satoru in saving kayo from her abusive mother and who Satoru later saw as a father figure during that period.

The characters were all grounded rather well and the motives for their actions were displayed allowing a relation between them and the viewer, although like I said earlier, there were plot conveniences and this also affected the character development. Even still the series was beauteously crafted and displayed quite Well. The voice actors were good and the delivery was effectively placed.

The art style was good and quite easy to follow. A-1 pictures performed their usually cinematic excellence, same as with works like sword art online, nanatsu no taizai, fairy tail, blue exorcist and several others. The views were smooth and the colors breathed life into series.

I liked the blue butterfly before every “revival” and the filmstrip scenery when transcending time as descriptively portrayed in the series. It further added a sense of absorbing and exciting suspense and gives certain mental crispiness to the story progression. The animation is fluid and the angles were coordinated brilliantly.

The music is also good. They seem to glide with the art and animation and were just orchestrated and delivered at affective moments, supporting the themes when necessary, adding a mysterious or dramatic undertone when needed. A splash of wonderful scores was accurately provided and rightly matched, giving the art even more color than it possessed. One can simply “hear the life” intertwined with the amazing art. In addition, I simply enjoyed the opening and ending songs too. They were memorable and were delivered rather well too.

Boku Dake ga inai machi (Erased) is simply a masterpiece which I enjoyed. Although as great as it is, it also has its flaws, but I believe, the dramatic setting, mysterious build-up, and emotional connection which were displayed with suspense and acute with intricately defined themes overshadowed many of those flaws.