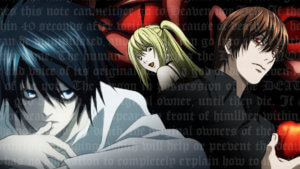 Death Note is basically about an introverted teenager ‘Yagami Light’ who inadvertently stumbles upon a portentous black book belonging to a Shinigami called Ryuk. The book titled Death Note grants the holder power to kill whomever he wills, however, way, as long as he is able to write the name of the person in the note. The series revolves around Light using the Death Note to ‘cleanse’ the world of whoever he deems morally unworthy of life, in an attempt to turn the world into a utopian society. In his quest, he goes by the alias ‘Kira’, which attracts world-renowned private detective ‘L’ who joins in on the investigation to unveil the real person behind the name Kira and apprehend him.

Death Note is a tactical anime that questions the true nature of power and justice in a unique plot and with convincing characters. It is easily one of the greatest anime of all time.

I actually watched the Netflix movie adaptation of the same title before getting the anime. There were lots of complaints about the movie barely reaching up to the anime standard, so I decided to check out the anime for myself. Now the movie is a typical Netflix thriller with a dark, high school theme; it has its own fair share of suspense and mind-blowing events; it was pretty much an enjoyable watch for me. To be fair, I’m a sucker for Netflix productions really; but after watching the anime, I also concur that there’s no way Netflix’s Death Note movie could measure up to the anime standard!

In an enthralling blend of detective, drama and fantasy in one artful anime, Death Note tries successfully to absolve a world very much like the human world as we know it, where powers exist that defy the natural order of things (or possibly explains it) and the evil that reeks over ignorance of these powers.

Well, let’s get right to it then…

It all starts with the Shinigami…

Call them death incarnate if you will, the Shinigami are basically sprites or creatures of the dark directly affiliated with death. They are called death gods, to be precise. Supposedly every Shinigami possess a book called Death Note which they use to invoke death upon humans.

As I said, it all starts with the Shinigami, Ryuk. A bored Shinigami seeking an exciting life or event beyond the awfully drab life in the realm of death gods, deliberately throws away his Death Note, away into the realm of humans, hoping that someone will find it.

A human did find it -one intellectual nerd by the name Yagami Light. Light finding the book mildly intriguing picks it up to study it. On the first page was the statement “The human whose name is written in this note shall die”. He initially dismisses it has a hoax but, call it sheer curiosity, he still goes on to test the note by providing a name. Alas, the note is legit! It really does hold the power to kill.

Now Light is not one to get easily aggravated, even in really intense situations, so he quickly gets a grip and begins devising plans for this newly found otherworldly power. Ryuk becoming fascinated by the way Light handles the whole mysterious situation approaches him. Only humans who have touched or is in present possession of the Death Note could see the death god, so Light was able to see Ryuk. Ryuk pretty much becomes Light’s accomplice as he takes down criminals in a fashion that quickly becomes a worldwide rage. Of course, people started taking note of the mysteriousness of the various killings; and since it is bad guys that are being killed, people started showing public gratitude for this person, whoever it is (or whatever it is) that was making the death happen. They called the person the Death Angel, called him Kira which actually means ‘Killer’.

In any case, we all know the only people who won’t be happy about situations like this: the cops.  In the rise of the unprecedented killings, Interpol in the hope of apprehending this ‘Kira’ brought in an enigmatic and greatly brilliant international consulting detective called ‘L’, well popular for having cracked numerous crime cases around the world. Things got really interesting from there.

You see, L’s intelligence greatly matches Light’s (Kira’s). For a greater part of the 37 episodes of the anime, Light and L are both involved in mind games of deduction, manipulation, and deception, with L easily deducing in no time after meeting Light that he is Kira, and Light being aware of the threat L places on his legacy and hence the need to end him. So L has to prove that Light is, in fact, Kira as he has deduced, and Light has to find out L’s real name in order to be able to kill him with the Death Note. Either of them has to outsmart the other, one way or another, for this game of brilliant minds to end and one person, emerge gloriously. But how can that happen, when the two of them are equally as intelligent as the other?

Death Note is one of those anime I really respect for the characters. The anime designed each major character in very unique ways, each being able to provoke irritation from you, and stir empathy, all the same, should you begin to really understand them. Here are a couple of major characters: 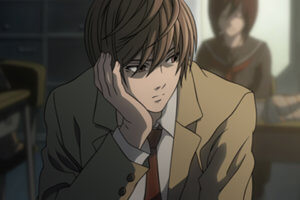 LIGHT,          He is the teenage high school kid who found the Death Note. He is that kind of character that ultimately gets alienated from everyone around him because of his proud intelligence. So yeah he’s pretty much of a loner “no friends”. One thing he has in common with Ryuk is the feeling of boredom, which is well expected of someone like Light. For someone so intelligent, normal life can be point-blank unbearable. Finding the Death Note was a life-changer for him. It was a whole new experience –an otherworldly experience. He could not get enough! Suddenly he is no longer just some intelligent, handsome high school teenager; he is now a teenager with the power of Death itself. He easily gets obsessed with this change and will do whatever it takes to keep this new life.

L,         An international private detective, was called on by Interpol to head a task force created to apprehend the public killer ‘Kira’. He is notable for remarkably high deduction ability and known to make use of rather extreme means (possibly criminal) to crack a case. At a very early stage of investigation into the ‘Kira’ case, he easily deduces that Yagami Light is, in fact, Kira, and makes it his goal to prove that fact. Now L is pretty much the same as Light, only much weirder. A fundamental design to his character is the dark shade beneath his eyes, hinting Insomnia; and there’s the fact that he barely ever has footwear on, and prefers to sit with his legs cocooned to his body on the seat rather than his feet on the ground like a normal person. L is highly meticulous, analytic and cunning. Like I said earlier, he and Light were engaged in the game of deduction, manipulation, and deception for a good part of the series.

MISA AMANE, An up-and-coming model and a fellow supporter of Kira. She has a death god accomplice just like Light and consequently is in possession of another Death Note. She seeks to find Kira in order to thank him for avenging her parent’s death. To achieve this, she made a trade with her death god for the ‘Shinigami Eyes’ which enables the user to know the full name of everyone they see. Misa is very popular (being a model), she is very cheery but can be explosive too, and things get really scary when that happens. She appears and talks really dumb and clueless most times, but she proves considerably smart in certain situations too.

Then there are the two major death gods introduced in the anime –Ryuk and Rem. Rem is the name of Misa’s death god, she developed a forbidden bond with Misa, falling in love with her.. yeah, that didn’t end well.

Death Note has a really cool art style and interesting animation. The subtleness of the animation gives the anime its serious tone which helped better tell the story. The sound editing is pretty cool too. The probably most signatory sound in the anime is the sound used when Light is in his ‘god mode’ as I like to call it; that moment when he wants to write a name in the death note is always accompanied by this really intense sound that just absolves you in. Generally, the anime has pretty simple sounds.

Thanks for reading this review, I hope it was helpful. In the meantime, Jaa ne.