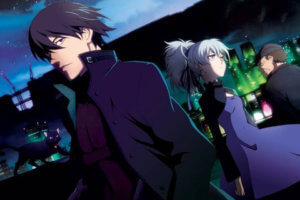 A strange phenomenon occurred ten years prior to the series’ genesis, decimating a large area of terrestrial landscape and creating an unapproachable field. Now called Hell’s gate in Japan, with an equally strange counterpart in South America, dubbed Heaven’s gate. The mysterious anomaly resulted in the disappearance of the stars and their replacement with false celestial bodies. Consequentially, it also brought about the introduction of the soulless dolls and contractors; people who possessed supernatural abilities at the cost of their conscience and emotions. And also, for utilizing their abilities, there’s an Obeisance paid. This can be anything, ranging from aligning stones or self-inflicting tortures to ingesting daffodils. These false stars are particular to each contractor and so contractors are recognized by a certain messier code unique to each star. A powerful and mysterious contractor codenamed Hei is at the center of the happenings of the “gate phenomenon” and carries out assassinations and espionage activities for an enigmatic organization labeled, ‘the syndicate’ who seeks to peer into the strange anomalies. While facing his own troubled past of revenge and unanswered questions.

Darker than black was original in every sense of the word.

A mystery and science fiction thriller that possessed an interesting and unique premise. Talking about mystery, I really love the MC, Hei, who seem suffused with the hot (or cold?) air of said mystery. Especially as he didn’t seem as emotionally detached as most contractors and didn’t need to pay an Obeisance.

The character is all shrouded in enigma like a boiled egg that doesn’t open up till the latter part of the series. As enigmatic as his origins were though, in fact, the mystery kinda compels your interest in him even more. They found a way to make him mysterious without being bland or a boring character. Normally, one would lose interest if there’s no connection with the MC in some manner of reason. Usually involving some basic, historical and personal information about said character. Hei though, despite having a shallow bank of incipient information, still managed to draw out one’s interest and make you want to check out the next episode (for more clues).

The anime is really not for all though. And if you’re a sick pervert looking for panty shots and over the top fan service, well you’ll be disappointed (I should know. I checked   ***poker face***).

The anime has a pretty serious tone, even though, it’s not without its comedic and humorous moments, especially in the second season.

The plot seemed somewhat disjointed though. Yes, there’s a central story in the background, but the standalone episodic plots seemed to unnerve the descriptive flow. That’s what you’d think, after watching the first few episodes, but it’s not until much later that you’d appreciate this “disjointed” but beautifully crafted narrative technique. And this is another beauty of the anime; the storytelling. The pace is a little different than most anime. Once started, you just have no choice but to complete it, ’cause it’s totally incredible? Hell yeah! But also, it raises a lot of unanswered questions in the course of its progression which only gets dealt with as one nears completion. And even though some questions might still remain, they become insignificant as they’re overshadowed by the show’s brilliance.

The characters were designed quite well and were given some sort of depth and relation. And saying this about characters that are supposed without conscience and emotions is announcing a lot about how great a show it is and the perfect delivery and power of narration.

As I’ve said before and will say again. I really enjoyed watching Hei. His character was an interesting one. You have Hei, the syndicate’s enigmatic contractor and assassin, the cursed contractor, the black reaper as called by other contractors, who is all calculative, precise, agile, consistent, strong, close to perfect in combat and his alternate persona Li sheng Chung, the Chinese exchange student who’s everything Hei is not. Clumsy, simple and “very much human”. The contrasting personas and the transitions between them gives an interesting aura brimming with anticipation and some sort of connection despite lacking solid characterization. There’s also Misaki Kirihara, the police detective who fell for Lee sheng shung through some sort of repeated fated meetings. It was quite interesting too, as she was also absorbed in the case of the cursed contractor, Bk201 which was Hei as well. Kinda like “falling” for two people who are one and the same (although I can’t really call both “falling”). There’s also Yin, a white-haired doll and Hei’s partner in the syndicate who later kinda took the mantle from Misaki as the female lead protagonist. Her past was kinda visited too.  And other comrades of Hei, Mao, a cat, who’s also a contractor, having lost his body in a certain situation, giving the series comic relief in pointed intervals. And Huang who originally was a character I disliked but eventually came to understand as the series progressed. They all made the series a wonderful experience, enveloped in a cool, dark and wonderful display.

The art is quite good and the animations are well laid out. The fight scenes are especially creative and not excessively long or unnecessary. So they are not repetitive and boring.

The character design is also pretty relatable and the colors are cool and inviting. Bones animation didn’t fall short of their brilliant delivery, so also with works like Bungo stray dogs, full metal alchemist, kekkai Sensen (a personal favorite), mob psycho, to mention but a few. It’s not a masterpiece and all but has a pretty decent and fluidly portrayed color and camera delivery.

The music is moderately good as well. Right from the jazzy songs to the slow melodies and action-themed instruments. They all seemed to match the theme and create a standard and thrilling flow.

The anime is a wonderful one, with a brilliant premise, amazing narrative, and superb action. I’ll give it an 8/10 (plus a 0.5 for just the love I have for it). One hell of a show, it is.