In a city teeming with humans with supernatural abilities who operate under exclusively secret societies called ‘guilds’, there exist a particular guild ‘the Armed Detective Agency’ that stands for all thing good. In the rise of guilds with rather sinister intentions, this armed detective agency exists to protect the city from these supernatural threats by all means necessary. 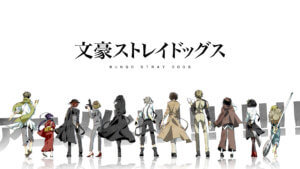 Bungou Stray Dogs is dramatic, thrilling in every way. The story revolves around the much common concept of humans with supernatural abilities, but it manages to take this concept in a direction that simply lives you enthralled.

The plot takes us into the strange city of Yokohama. Seemingly normal as it is, this city has powered humans with inexplicable abilities. It starts with the kid (it always starts with a kid). Atsushi is a poor lad who lived and got chased out of an orphanage for the simple reason of being an ‘unfortunate and worthless’ being. His tottering and wandering up and about lands him in the city of Yokohama, by the calm sea at the dawn of eventide. He is hungry, no, he is starving, and literally at the brim of death.

I must commend the introduction of this character, Atsushi, or rather the starting of the anime in general. It all starts subtly with an evident tone of humor. You really can’t help getting captivated. At the start of the anime, you just know already that this is an anime that will put a smile on my face. This is an anime you want to watch with your girlfriend (if you like me, have an otaku for a girlfriend). Lol.

So Atsushi, although starving and dying with each passing second, won’t allow himself to think of suicide. No. He’ll survive no matter what it takes. He will prove to the goddamn world that he is not worthless, he can’t do that when he’s dead. He will survive by all means, even if he has to become a street brat and thief. While pondering the unfortunate soul whom he will rob, something strange catches the corner of his eyes. He legit saw a human floating, his torso underwater, in the stream, drowning. Having tried unsuccessfully to ignore this rather disturbing sight, he ends up jumping into the sea and saving the drowning man. Turns out the dude didn’t want to be saved… Bla bla.. The dude turned out to be a member of the Armed Detective Agency, who has a knack for suicide apparently. Weird, I know. Anyway, Atsushi is introduced into the agency, and the misadventure, to say the least, begins.

An organization made up of these kinds of humans is what is called ‘guild’. Although ultimately the anime revolves around two significant guilds –the ‘Armed Detective Agency’ and the ‘Port Mafia’ –a couple of other guilds are introduced in various story arcs. The beauty of this anime is that with the introduction of a guild, you just can’t know what to expect from its members, what kind of abilities to expect. There are just so many really cool named abilities around. There is this one called ‘Light Snow’; the user of this ability basically transforms an entire scene into a snow-induced virtual reality where you can neither see him or easily hurt him, but he can greatly hurt you. There’s one too, a predictive ability, the ability to see a few seconds into the future at the brim of danger. As simple as this ability might sound to you, I assure you it’s nothing but omnipotent. This ability literally turns the user into a god. An amazing story arc involved two users of this ability. The fight between the two was absolutely mind-blowing!! I mean who would you expect to win in a duel where both fighters can literally read each other’s every next move?

You have watched a number of movies or animations involving powered humans, but I assure you, you haven’t seen anything like Bungou Stray Dogs. From a continuous feud between many different guilds to mysteries unfolding and carefully accounted for, amidst dramatic turn of events, it is hard to not be absorbed into this fantasy world…

The anime adds such cleverness to their depiction of supernatural gifts in amazing characters. We are shown sides of the characters besides their abilities. We are shown their history, their evolution. So yes to perfect character development! See the best part of the anime isn’t even the abilities. The unpredictability of the characters is striking. Every character is well designed and developed up to the point of being essentially able to take the story through a different angle at any point in time.

For me, the downside of this anime is in the character ‘Atsushi’. I really don’t enjoy his character arc. He is painted as this dude who constantly thinks he is worthless. He thinks he is good-for-nothing, never gets anything right. He is so affected by this belief that he is could be so vulnerable during battles, despite how great his ability is. I understand that this mode of thinking is psychologically induced by the way he was treated at the orphanage, but he simply takes it too far on the ‘pathetic’ level. He strikes me as a character that seeks empathy, and that just makes him appear ridiculous to me. I’m like ‘so a couple of guys called you unfortunate and unworthy of life? So? Get a life dumbass!” The series is still ongoing though, so there’s a chance his character is developed into someone with more self-esteem.

Other characters are great though;

Dazai —my (and basically everyone else’s ) favorite character is considered the major protagonist (I consider him the major protagonist anyway). Dazai is a very smart, very fun, very suicide-driven, crack-head. Yeah, you heard me, ‘very suicide-driven’. He legit jumps at every chance he gets to have a dramatic suicide. His swag though is something to respect. He is this carefree, dynamic character who is capable of adapting to whatever situation and turning it around significantly. He is usually one step, two steps ahead of a laid plan. His intelligence is only second to Rampo’s (another really interesting character). Dazai is endearing, with a bunch of absolutely ridiculous, completely insane ideas. But thing is, no matter how absurd he sounds, you can be sure he knows what he’s doing 100% or maybe 80% Lol.)

So, Rampo —simply the most intelligent character in the anime. He is like Sherlock, but with much greater deductive skills. This dude will close a case with the first minute of being introduced to the case. ‘Genius’ is legit, not good enough to qualify him. Yea, I love watching scenes or episodes with him as the center of focus.

Then there is Mori Ougai, boss of Port Mafia. I haven’t seen the extent of his powers yet. But so far, there’s being a number of cues pointing him out to be a really powerful person. He is highly charismatic, just like Dazai. Nah, actually, he is exactly like Dazai in everything, save for the fact that he is darker in character, and possibly evil (‘possibly’ because so far his intentions are not particularly clear yet). He is enigmatic and equally as unpredictable as Dazai. He might be a villain, but he is definitely the kind of villain you just like to see on the screen every time. But you don’t get that luxury, cos his appearance is pretty much a rarity. This makes you savor every moment you get to see him in scenes.

So yea the characters are really great. Love them!

The comedy is well placed. Bungou Stray Dogs, despite having its own touch of a dark theme, doesn’t try to force the theme on the story arc like some anime do —not mentioning names (Akame Ga Kill). Bungou Stray Dogs is just really exciting, really action-packed anime.

The animation is enthralling, with amazing quality, you just want to keep on watching. The fight sequences are brilliant, captivating really. The whole motion picture thingy during the opening and closing theme is splendid.

The sounds are cool. There’s this really nice sound used when an episode is nearing the end; it’s subtle yet has something refreshing about it. It makes you look excitedly toward to seeing the next episode. The opening and closing theme is remarkable really.

Bungou Stray Dogs is a really cool anime. I score it 8/10.